After a first half that saw around a third of our preseason Top 50 Prospects receive big league promotions, the number of elite players... 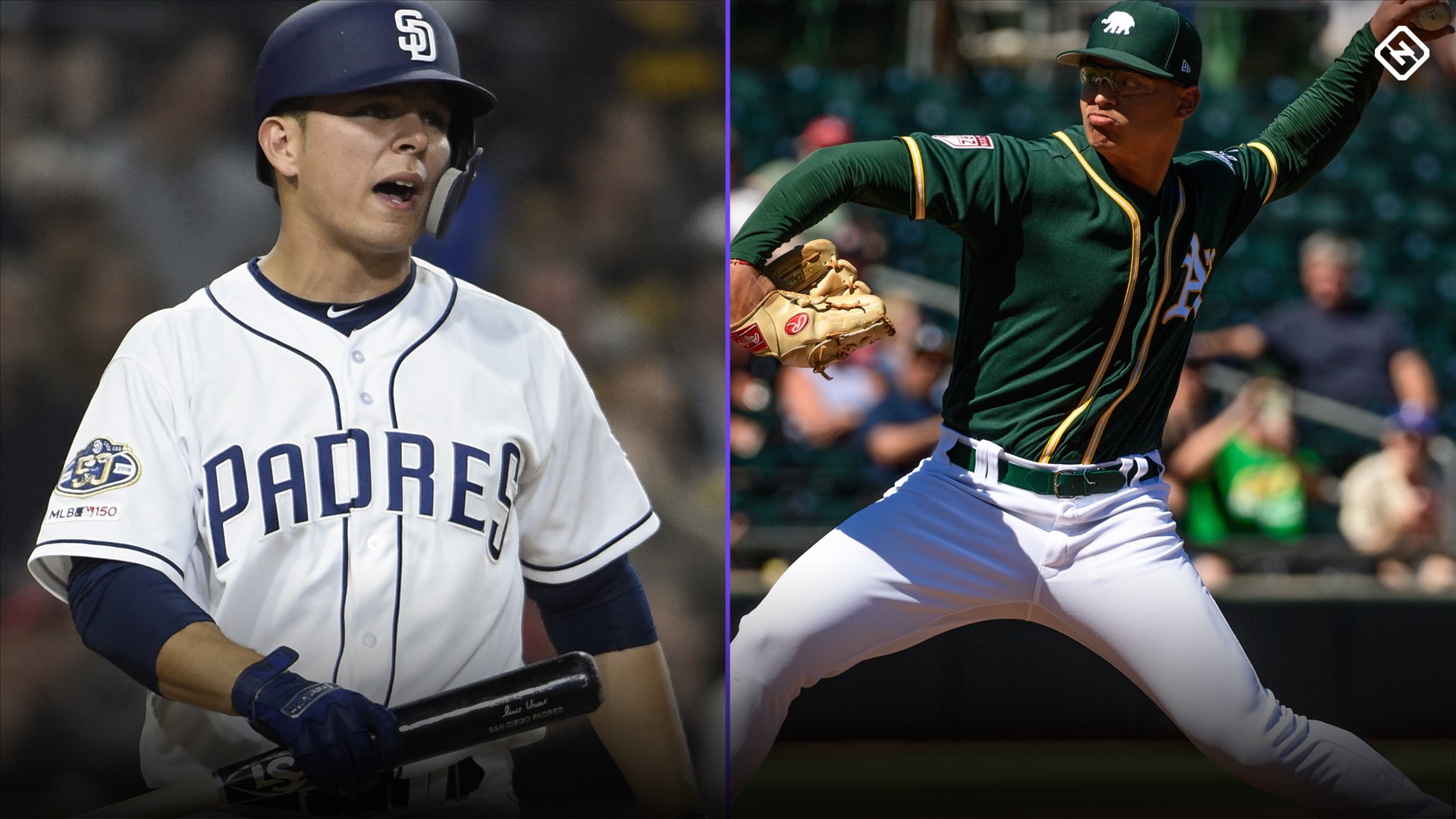 After a first half that saw around a third of our preseason Top 50 Prospects receive big league promotions, the number of elite players on the cusp of the major leagues has shrunk considerably. However, there is still plenty of talent in the upper minors and there’s no doubt that we’ll continue to see large numbers of rookies make their way to the bigs in the second half of the season — which means we’ll see plenty of call-ups play key roles in fantasy baseball leagues down the stretch (especially in Keeper/Dynasty leagues).

Interested in sports betting? Tell us what YOU want from a mobile sportsbook

Here are the 10 guys from my midseason Top 50 who are most likely to have a big league impact in the second half of the season:

1. Keston Hiura, 2B, Milwaukee (No. 12 in our midseason prospect rankings). Hiura impressed in a brief May call-up (.281 with five HRs), but he was sent back to Triple-A after 17 big league games when Travis Shaw returned from the injured list. Since then Hiura has continued to hit and Shaw has continued to struggle. The Brewers are still in the thick of the pennant race and eventually should give Hiura another shot. Hiura can be too aggressive at times, but he’s one of the best pure hitters in the minors and should continue to produce in the bigs. Long-term, expect an average near .300 with moderate power (12-15 home runs) that could increase as he matures.

2. Luis Urias, 2B, San Diego (14). Urias also spent some time in the bigs earlier this season but struggled mightily (.083 average in 11 games). Since returning to Triple-A he’s been on fire (.331 average with 17 HRs in 59 games). The Padres still have a shot at the playoffs and incumbent second baseman Ian Kinsler hasn’t played well, so San Diego could soon give Urias another chance. From my conversations with Urias about his big league experience, I think he was just anxious and should eventually adjust to the majors. His skill set is elite – great hand-eye coordination, plus bat speed, and excellent pitch recognition – and his 2019 home run surge is a sign that he could hit for both average and some power.

3. Mitch Keller, RHP, Pittsburgh (17). Keller has been knocked around this season in three big league spot starts, but he has an elite arm and should see more action in Pittsburgh later this year. Keller has dominated in the minors, but he’s typically taken some time to adjust as he’s advanced from one level to the next. Keller has plus stuff featuring good command of an electric mid-90s fastball, a plus curve, and above-average changeup. Long-term, he could be a No. 2 starter.

4. Bo Bichette, SS/2B, Toronto (6). Bichette missed time earlier this year due to a broken hand, but he looked big league ready when I saw him in spring training and hasn’t skipped a beat since returning to game action at Triple-A (.295 average with three HRs and seven SBs in 25 games). The Blue Jays are in full rebuild mode and could very well give Bichette an extended look in the latter part of the season. I expect Bichette to succeed right away, as he’s a ferocious competitor with a great work ethic and the tools to hit for average, stroke 20-plus home runs, and steal 15-20 bags.

5. Brendan McKay, LHP/1B, Tampa Bay (15). The Rays are in the playoff hunt this season, and McKay is a talented arm who’s big league ready (1.22 ERA and 88/15 K/BB with only 38 hits allowed in 66.2 IP between Double-A and Triple-A). Eventually Tampa will need to call him up even if an innings limit relegates him to a bullpen role. McKay has a smooth, repeatable delivery, shows plus command of four quality pitches, and should eventually be a No. 2 starter in the bigs.

6. Kyle Tucker, OF, Houston (10). Tucker struggled in a big league cameo last season and is now stuck behind a log jam in the Houston outfield. All he’s done in response is get off to an eye-popping start at Triple-A (.281 average with 23 HRs and 17 SBs through 71 games). The Astros have a deep but injury-prone outfield, so don’t be surprised if injuries open the door for Tucker to get another shot in Houston. Tucker is a polished hitter with good balance and plus bat speed that generates excellent raw power. If he can tighten his plate discipline, he should hit .270 with 25-plus home runs over a full big league season.

7. Jesus Luzardo, LHP, Oakland (5). Luzardo missed the first two months of the season with a shoulder strain and is still working back into shape, but he looked big league ready when I saw him in spring training. Only 21 years old, Luzardo is already one of the best pitchers in the minors with excellent command of three quality pitches (plus fastball, plus change, and above-average breaking ball). If he can tighten his curve and pitch consistently at Triple-A, he’ll probably get a call-up to Oakland later this summer.

8. Justus Sheffield, LHP, Seattle (47). Sheffield is like the proverbial box of chocolates – you never know what you’re going to get. At his best, he’s a No. 3 starter with a plus fastball and nasty slider. At his worst, he can’t find the zone with his heater and throws cement-mixer breaking balls that get launched in the seats. If he can show some consistency over the next month the Mariners will almost certainly give him a big league look, if for no other reason than to show that they got some return in the James Paxton deal.

9. Dustin May, RHP, Los Angeles Dodgers (49). The Dodgers have a fragile rotation and have already used eight different starting pitchers this season. May is a polished arm who has logged at least 120 innings each of the past three seasons. He’s currently throwing well at Double-A (3.74 ERA with an 86/21 K/BB in 79.1 IP) and has the stuff to be a quality mid-rotation guy. He’s an obvious choice for a call-up if the Dodgers lose one of their starters down the stretch.

10. A.J. Puk, LHP, Oakland (#18) – Puk missed 2018 due to Tommy John surgery and has just returned to game action but he’s already 24 years old and was on the cusp of the majors when he got hurt last year. Puk will get eased back into action but if the A’s hang around in the Wild Card race, he would be an attractive late-season addition to the big-league bullpen or rotation. When healthy, he has an electric fastball, wipeout slider, and can draw comparisons to a young Chris Sale.