TOKYO – A man stabbed at least 16 people, including 13 Japanese schoolchildren waiting at a bus stop, before fatally stabbing himself Tuesday (May... 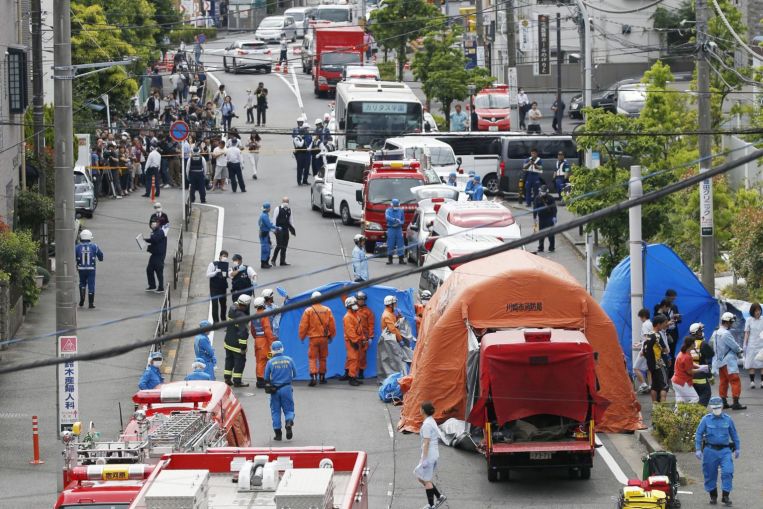 TOKYO – A man stabbed at least 16 people, including 13 Japanese schoolchildren waiting at a bus stop, before fatally stabbing himself Tuesday (May 28) morning in the city of Kawasaki, a suburb southwest of Tokyo, police said.

One of the schoolchildren, a 12-year-old girl, and a 39-year-old man both died in the attack.

After carrying out the attack, the suspect, described as a man in his 40s or 50s, stabbed himself in the neck and subsequently died, officials told Japan’s public broadcaster NHK.

The attack happened as United States President Donald Trump was in Japan on a four-day state visit.

“On behalf of the first lady and myself, I want to take a moment to send our prayers and sympathy to the victims of the stabbing attack this morning in Tokyo,” Mr Trump said in a speech on board a Japanese aircraft carrier, at the Japanese Maritime Self-Defence Force (MSDF) base in Yokosuka, south of Tokyo.

“All Americans stand with the people of Japan and grieve for the victims and for their families,” the US president said.

“It is a very harrowing case. I feel strong anger. I offer my heartfelt condolences to the victims and hope the injured recover quickly,” Mr Abe said in a televised reaction, his first since the attack.

Violent crime is rare in Japan, and gun-ownership laws are strict, but there are occasional high-profile attacks, often using knives or vehicles as weapons.

Here are some other recent tragic incidents:

Earlier in May, a 56-year-old man was arrested for trespassing after he left two knives on the school desk of a young Japanese prince. Police said the man confessed to intending to stab 12-year-old Prince Hisahito, who one day stands to inherit the Chrysanthemum Throne, because he disagreed with the imperial system.

In June, a 22-year-old man was arrested in a random stabbing incident on board a shinkansen bullet train, which left one dead and two others injured. The stabbings had occurred on train service Nozomi 265, which runs between Tokyo and Shin-Osaka stations – considered to be one of the world’s busiest train routes.

In Sagamihara, a small town south of Tokyo, a 26-year-old man claimed he wanted to kill disabled people and carried out a knife attack on a care facility where he had worked. He killed 19 patients in their sleep and wounded 26 more. The man had described it as a mission to rid the world of people with mental illness.

13 people were injured when a 27-year-old man went on a stabbing rampage on a school bus and a commuter bus in Toride, a suburban town north-east of Tokyo. The man, who was later arrested, told police he wanted to end his life.

A 28-year-old man drove a truck into a crowded pedestrian crossing in Tokyo’s popular Akihabara shopping area, killing three people, and then descended from the vehicle to fatally stab four more. He was later sentenced to death.

Eight children were stabbed to death by a former janitor at their school in Osaka. The 37-year-old man, who was later sentenced to death by hanging, reportedly had a history of mental illness.