Iran’s judiciary said Friday that about 100 people accused of having led violent antigovernment protests over fuel price increases had been arrested nationwide, and... 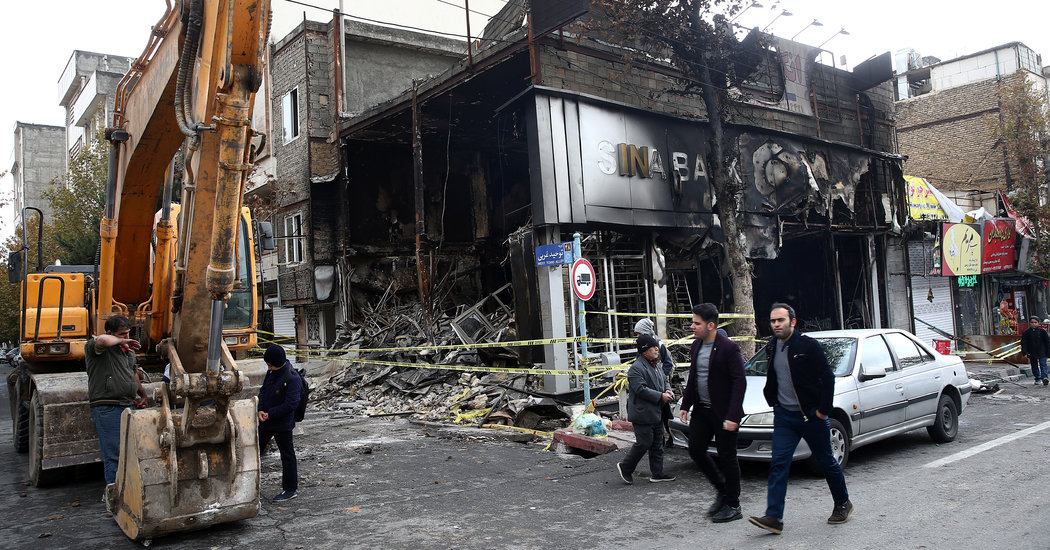 Iran’s judiciary said Friday that about 100 people accused of having led violent antigovernment protests over fuel price increases had been arrested nationwide, and a top cleric said they deserved the “maximum penalty.”

The declaration by the cleric, Ayatollah Ahmad Khatami, leader of Friday Prayers, suggested the authorities intended to make examples of the suspects to help crush any remnants of the deadly protests, which upended life in dozens of Iranian cities and towns.

While Mr. Khatami did not specify if he meant that the suspects should receive the death penalty, the Kayhan newspaper, mouthpiece of the supreme leader, Ayatollah Ali Khamenei, has said they should be hanged.

“This is not a system that will be shaken by these stupid evils,” Mr. Khatami said, according to a translation by Iran’s official Islamic Republic News Agency.

In scrambling to respond to the protests, Iranian officials disconnected almost the entire country from the internet, effectively censoring the true extent of casualties and destruction. The shutdown also blocked Iranians from using social media messaging apps, crippling a popular way to share information.

The Trump administration, which welcomed the protests, said Friday that it had sanctioned Iran’s minister of information and telecommunications technology, Mohammad Javad Azari Jahromi, for what it called his responsibility for the internet shutdown.

“While Iranian regime leaders maintain access to the internet and social media accounts for themselves and their cronies, they deprive their people of these basic tools of expression and communication,” Secretary of State Mike Pompeo said in a statement. The United States, he said, “stands with the people of Iran in their struggle against an oppressive regime that silences them while arresting and murdering protesters.”

The sanction means the United States could impound any assets in its jurisdiction that Mr. Azari Jahromi owns.

Mr. Azari Jahromi, a frequent Twitter user, reacted as though the sanction were a badge of honor. “I’m not the only member of club of sanctioned persons (Based on Trump’s fairytales),” he wrote in a post.

Mr. Azari Jahromi has said in the past week that the Supreme National Security Council had ordered him to shut down the internet and that he could fully restore it only when the council allowed.

As of Friday, internet access had been restored to less than 20 percent of its normal level, according to NetBlocks, a group that tracks internet usage and cybersecurity. The limited access was for government agencies, universities, security forces and some commercial businesses, but ordinary Iranians still appeared to be disconnected.

Amnesty International said the death toll had climbed to at least 115, but a confirmed tally was impossible to ascertain given limited access to the country. Iranian officials have denounced Amnesty’s figure as speculative but have not specified how many people were killed or injured.

An anecdotal picture of widespread destruction and harsh crackdown has emerged from videos and postings that Iranians managed to share despite the internet restriction. Official accounts have also shown remnants of ransacked stores and burned banks but have said the mayhem was contained within a few days, and have denounced what they called American-backed attempts to stoke more unrest.

“Based on information we have received, the Americans have gone mad that the riots were over within 48 hours and are disappointed that there is no more disorder in Iran,” Brig. Gen. Ali Fadavi, deputy commander of the Islamic Revolutionary Guards Corps., said on Friday in remarks quoted by Iranian media.

But General Fadavi said protests and riots had raged in more than 100 cities across Iran. He also said the unrest had amounted to “a war” and drew a comparison to a notoriously bloody battle during the 1980-88 Iran-Iraq war, known as Operation Karbala 4, that left 12,000 Iranian troops dead in three days.

The reference to Karbala 4 appeared to be among the first public acknowledgments by an Iranian official that hinted at the scope of damage and casualties.