Here are some consumers’ motoring experiences and models that may tempt more to go all-electric. Tesla Model 3: Range: up to 499km: Price: about...

Here are some consumers’ motoring experiences and models that may tempt more to go all-electric. 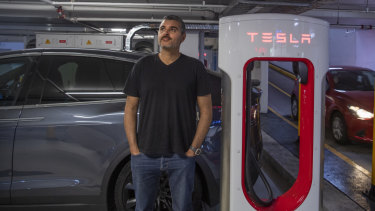 Industrial designer Rabah Maraby has sights on a Sydney to Gold Coast drive this weekend with just two recharge stops planned for his Tesla EV after plugging into Mirvac’s recharge centre in Broadway.Credit:Louise Kennerley

Rabah Maraby forked out $180,000 for his Tesla Model X and reckons its 100 kilowatt-hour battery will need just two charges to get him from Sydney to Gold Coast with his family this weekend.

“Not having to stop at a service station is really cool,” he says as he recharged at Broadway Shopping Centre in inner Sydney on Thursday. As is the car’s “instant power”, an advantage all EVs have over petrol rivals.

Tesla’s next offering, the Model 3, is available from July. 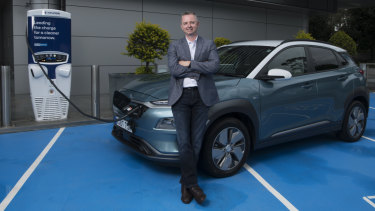 Hyundai Motor’s manager of future mobility Scott Nargar with one of the carmaker’s Kona EVs.Credit:James Brickwood

The Korean automaker’s Ioniq was the car Labor leader Bill Shorten chose to help launch his EV plan. The other new model creating a stir is the Kona Electric, the company’s first e-SUV.

Charles Dalglish, a retired “engineering type” who has built three EVs himself, waited two years to get his hands on the first Kona in Australia just over a week ago. Solar panels at his Little Hartley home in the Blue Mountains provide him the power he needs for most trips.

His version cost about $71,000 and he’s preparing to drive to Uluru and back, figuring his 450-km range will get him between recharge points. Driving an EV he says has made him more sensitive to “smelling other people’s pollution”. 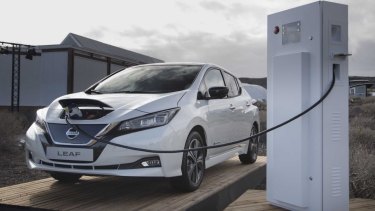 Nissan Leaf will go on sale in Australia from August, with the company reporting 12,000 ‘expressions of interest’.

Nissan claims to have sold more than 400,000 of its EVs, mostly based on the original Leaf sedan. The Japanese automaker will begin deliveries of its new Leaf in Australia from August.

The car will be the first to include bi-directional charging, allowing it to power homes or even the grid – a useful feature likely to become more common.

Jim Hare was the first in Australia to drive the original Leaf, taking delivery in 2012. “It’s been an amazing experience for us ,” the ex-Silicon Valley resident now based in Killara on Sydney’s north shore said. “It’s never let us down.”

Recharging costs are either free, via solar panels, or just 11 cents per kW-hour, meaning a cost of 0-$2.50 for a full charge. 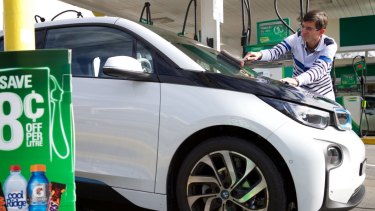 EVs, such as the BMW i3, only need a service station stop for air and the occasional windscreen wipe. Credit:Wolter Peeters

The German automaker’s i3 was a relatively early mover, entering the market in 2011. The appeal of the sedan included its use of a carbon composite passenger cell, underscoring its claim to be the first car deliberately designed as an EV from the get-go.

As an owner, your correspondent has charged the vehicle from a standard power point at home, topping up each evening at about a third of the cost per kilometre of a typical petrol car. Only once has the battery dropped to less than 20km remaining charge.

The main drawback is that any need for spare parts – say after a minor bingle – has meant periods of time off the road because of the model’s relative rarity.

Almost certainly the next purchase will also be an EV.

Peter Hannam writes on environment issues for The Sydney Morning Herald and The Age.