'Amazing': Dwyane Wade's last game in Miami may have arrived

MIAMI (AP) — By Thursday, Dwyane Wade may not be employed as a basketball player anymore. That is the reality, like it or not.... 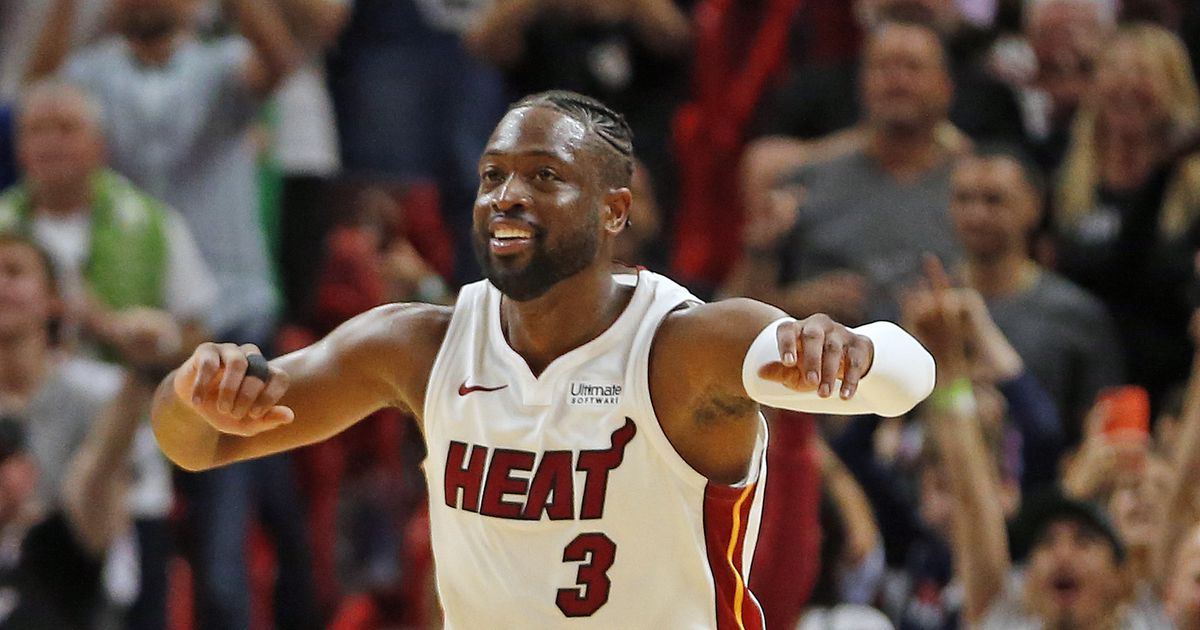 MIAMI (AP) — By Thursday, Dwyane Wade may not be employed as a basketball player anymore.

That is the reality, like it or not. After 16 seasons as an NBA player, after three championships, an almost-annual spot in the All-Star Game, a scoring title, three franchises, four children, an Olympic gold medal and 161 teammates, the end may have arrived.

On Tuesday, Wade plays his final home regular season game when the Miami Heat host the Philadelphia 76ers. On Wednesday, it’ll be a game at Brooklyn to end this season. Unless the Heat win both and get a lot of help in the final two days of the season, the career of Dwyane Tyrone Wade Jr. will be finished.

“I gave this game everything I had,” Wade said. “And I have appreciated every bit of it.”

The Heat still have a faint pulse in the playoff race; out of the 64 possible remaining scenarios involving Brooklyn, Orlando, Detroit, Charlotte and Miami over the next two days — the five teams still vying for various spots on the bracket, with the Nets and Magic being assured of getting into the postseason no matter what — there are only three that will send Wade into the postseason.

Obviously, the odds are not good.

That is why Tuesday is generally viewed as the farewell, even though no one will officially describe it as such. He doesn’t want it to be the end — but is acutely aware that it may be the 576th and final time he plays at AmericanAirlines Arena, all but one of those coming in a Heat uniform.

Tributes will come Tuesday in various forms. There is a pregame series of events inside the arena. There will be videos. Wade will address the crowd. Celebrities are expected. Wade’s children will all be in attendance. Students from Marjory Stoneman Douglas High, the school where the Feb. 14, 2018 massacre that left 17 dead in an event that touched Wade so deeply — not just because one of those victims was buried in a Wade jersey — will perform the national anthem.

There will be Wade “L3GACY” shirts given to fans, some of whom spent thousands for their seats. There will be Wade commemorative lanyards. There will be Wade apparel. Some arena workers asked if they could be excused from wearing the usual game-night garb and don Wade jerseys instead. Fans flew in from as far as Australia and China. NBA Commissioner Adam Silver sent his regards in a video.

And then, there will be a game.

The M-V-P chants will come. The ovations will be lengthy. There will be tears. And the Heat will try to make a playoff miracle happen.

“I don’t want this to end,” Heat coach Erik Spoelstra said. “I’m literally having more fun this year and last year than in any of the other years with Dwyane.”

They are the same in so many ways, Wade and Spoelstra. Both came to the Heat as unsure young men. Both have three championship rings now. Both are likely for the Basketball Hall of Fame. When Spoelstra was promoted to head coach in April 2008, he was unsure if he’d be able to handle the job — until he met with Wade a few months later and got pumped full of confidence.

“That’s what great players do,” Spoelstra said. “You talk about Hall of Fame players, they make the other players around them better. Well, great, Hall of Fame, superstar players also make their coaches better. And that’s what Dwyane did.”

Wade is beloved in Miami, of course, for obvious reasons. Beloved in Chicago, too, his hometown. Beloved in Milwaukee, where he took Marquette to a Final Four in 2003.

And this farewell tour — the “One Last Dance” — is a league-wide victory lap for someone NBA players rave about.

Wade isn’t 2008 Wade, or Big 3-era Wade, or NBA Finals MVP Wade anymore. But he’s still superb, and with a flair for the dramatic — such as the buzzer-beater to top Golden State a few weeks ago. He’s been the best Heat player all season. It’s hard to imagine how Miami will replace him next season, because he is going to be clearly missed.

But that’s also part of the reason why this season is his last. Wade didn’t want to go out as a shell of his former self. He wanted to leave the stage with the fans clamoring for more, and that is precisely what has occurred.

“That’s the sweet part of it, seeing him be able to go off on his own terms, saying when he’s done,” said his former teammate and still-close friend LeBron James of the Los Angeles Lakers. “Nobody forced him out or did anything of that nature. He’s able just to hang it up when he was ready to hang it up and be at peace with it all.”